Making a difference in the lives of others.

Each year the MomFirst Award will be given to a woman who started something new when, in her own role as a Mother, she saw a need and filled it… first as a Mom at home, and then in the marketplace. Through her ingenuity, commitment and entrepreneurial perseverance this woman developed and took to market something that has made a difference in the lives of so many others. We recognize her business success as we remember how it started… she was a Mom, first! 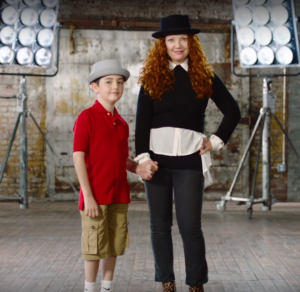 Mindy Scheier has worked in the fashion industry for over 20 years. In working as a key member of the design team for the INC collection, as well as styling Saks Fifth Ave in NYC, Mindy has infiltrated the fashion world. She has dedicated her life to being the change she wants to see within the fashion world by being relentless in her mission to create an all-inclusive fashion community.

Her love for inspiring children and influencing fashion came full circle when she started a fashion design school for kids ages 5-18 called Future Fashionistas. After the success of her school, she saw other opportunities to make a difference in the fashion world. Mindy founded the first 501c3 non-profit organization to develop adaptive version of existing apparel when she created Runway of Dreams.

A mother of three living in Livingston, New Jersey, her son, Oliver, was born with Rigid Spine Muscular Dystrophy, causing clothing challenges due to muscle weakness and his inability to dress himself. After spending years in the fashion industry, she decided there was an opportunity to meld her worlds together.

Runway of Dreams aims to be the authority on incorporating modifications to mainstream clothing for the differently-abled community, changing the landscape of fashion as being ALL-INCLUSIVE. Wearing fashionable, adaptive clothing can help being different feel “normal.” Runway of Dreams collaborates with brands in the fashion industry, such as Tommy Hilfiger, USA, to develop, modify, and create adaptive versions of mainstream clothing. Mindy Scheier continues to break barriers and challenge industry norms daily. 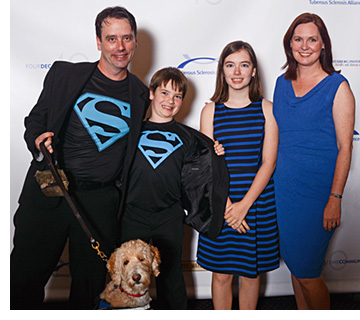 Congratulations to Lisa, Rob, Aria & Evan Moss (and Mindy too!)

Five years ago we introduced The MomFirst Award which is given to a woman who started something new, when in her own role as a Mother, she saw a need and filled it, first as a Mom at home, and then in the marketplace to make a difference in the lives of others.

This year the award will go to the entire Moss Family and here’s why. Mom: Lisa…Dad: Rob…Children: Aria and Evan…and Evan’s Seizure Dog: Mindy — are all advocates and social entrepreneurs in the united goal of making a positive impact in the communities focused on a genetic disorder called tuberous sclerosis complex (TSC) and epilepsy.

Their journey began with Evan’s diagnosis of TSC and epilepsy, and a tenacious outlook that led them all to take action and make a difference.

For instance, Lisa & Rob worked together to build SeizerTracker.com, launched in 2007 as the only comprehensive online diary system designed to empower people in their own treatment & to improve patient-doctor communications. It has created the largest database of seizures in the world with over a million events logged and is being used in partnership with the National Institutes of Health (NIH) to further research.

Lisa took her business skills to the TS Alliance where she is now the Senior Director of Donor relations.

Evan is now 11 years old and became a bit of a media sensation when he published a book called My Seizure Dog — about his seizure dog, Mindy, Proceeds from sales were able to help 7 other children receive their service dogs. Evan has since written a second book, My Life with TSC.

Evan’s big sister, Aria, 13, is an advocate in her own right. She has had multiple speaking engagements including a Congressional Briefing on TSC. Mindy is an ambassador of pure canine love!

This is a family endeavor…a commitment drawing on talents and resources to help as many people as possible. That’s why MomFirst 2015 honors Mom Lisa & her entire family!

Brook and Jack Klawitter, a Mother and son team who lead a monthly Special Olympics Young Athletes Program, chaired a successful Special Olympics fundraising committee and one of the youngest Special Olympics Global Ambassadors, were presented with the 5th Annual MomFirst Award on October 23, 2014 at the 10th Annual M2Moms® – The Marketing to Moms Conference, Chicago.

“This is the very first time that a Mother and Son were given the MomFirst Award because together they are making a difference…and it wouldn’t be possible if it was just one and not the other too. They are a team!,” stated Nan McCann, M2Moms® producer. “Brook and Jack are both making such a difference in the health & happiness of so many children and families.” 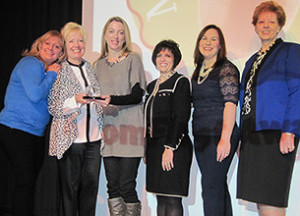 Julie Cole, Co-Founder of Mabel’s Labels, a company that helps families get and stay more organized with durable and personalized label products, was presented with the 4th Annual MomFirst Award on October 24, 2013 at the 9th Annual M2Moms® – The Marketing to Moms Conference, Chicago.

“Julie is a mother of six and after her eldest son was diagnosed with autism, she shelved a legal career to monitor his therapy and launch a business that would strike a better work/life balance,” stated Nan McCann, M2Moms® producer. “Mabel’s Labels has since grown from basement start-up into an award-winning, celebrity-loved phenomenon.”

Julie and Mabel’s Labels have been featured on The View, Today, The Early Show, Rachael Ray, LIVE! with Regis and Kelly, People.com, Forbes.com, and in Parents, In Style, Maclean’s, The Globe and Mail, The Toronto Star, The Washington Post, Huffington Post, and countless other media outlets. As company spokesperson, Julie is well known among North American mom entrepreneurs. Her dynamic personality makes her an in-demand speaker everywhere from university business classes to TV and radio shows, including a regular spot as parenting expert on HLN’s Raising America (Atlanta) and CH Morning Live. In addition to interviews and articles in major print publications, she is a syndicated blogger whose writing has also appeared in Chicken Soup for the Soul – Power Moms and numerous websites. 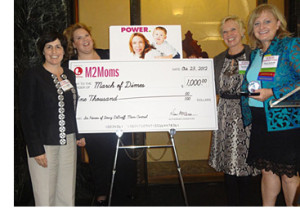 The third annual MomFirst Award was given to Stacy DeBroff, founder and CEO of Mom Central Consulting. As part of the award, M2Moms® made a $1,000.00 donation in Stacy’s honor to the March of Dimes.

“We recognize Stacy’s business success in the creation and growth of Mom Central, a company devoted to providing savvy advice to simplify and enrich the lives of busy Moms and their families, as we celebrate how it started… Stacy was a mom, first!,” stated Nan McCann, M2Moms® producer, when giving the award. “Mom Central evolved out of Stacy’s work that focused on helping professional moms like herself achieve a satisfying work-life balance. She wrote four best-selling books on the topic, and soon top brands began seeking her out to help them build business with today’s moms.”

Heidi Murkoff, author of What to Expect When You’re Expecting, was awarded the 2nd Annual MomFirst Award. At the helm of the What to Expect (WTE) franchise, Heidi Murkoff is the creator of the world’s most popular and trusted pregnancy and parenting brand. WTE delivers empowering information — along with support and reassurance — to millions of expectant and new parents. Its mission: to help every parent know what to expect, every step of the way. The brand includes the What to Expect series of books, which have sold over 40 million copies worldwide and are published in more than 30 languages; their online companion, WhatToExpect.com; and the WTE Pregnancy Tracker iPhone app — now ranked #1 by Apple in the health category. She’s also the co-founder of the What to Expect Foundation, a nonprofit organization that helps low-income families have healthy pregnancies, deliveries, and babies. She lives with her husband, Erik, and their two children, Emma and Wyatt, in Southern California. 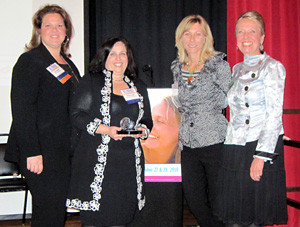 Nadine Vogel, Springboard Consulting, was awarded the inaugural MomFirst Award Nadine’s firm, Springboard Consulting, collaborates with multinational corporations, Federal governments and national agencies on initiatives to successfully mainstream disability in the workforce, workplace and marketplace. Her work with brands to successfully market their products and services to this community — now the largest minority market in the United States — is worthy of our admiration, respect, and commendation.

Prior to founding Springboard, Nadine held a variety of both corporate and non-profit executive positions. But, when she became a mother of two special needs daughters, her love and experience as a Mom ignited a new passion in her that has now fueled important change in many organizations. The marketing-to-moms community is enlightened and inspired by her work and the world is a better place because of her remarkable efforts.